Spirit House Continues to Decline, Rexie in a Huff Over the Public Use of Spirit House Pictures

For my upcoming talk to the Madison County Historical, SPIRITUALITY AND REFORM IN THE BURNED-OVER DISTRICT(3/22/17) I decided to use a picture of Spirit House to promote the event. After all, many in Madison County know me for creating  the Spirit House Society to try and save and restore Spirit House by turning it into a Historic Home--Spiritual Retreat. Spiritualism also played a major role in reform in the Burned-over District.

When Rexie, the women who thwarted our effort by purchasing the home for herself heard about this she began to complain vociferously. Eventually the picture was removed. Evidently she claims that no one can take a picture of Spirit House, or talk about Spirit House in any manor with our her permission and paying her a royalty. Where did she get  this idea from? Several of the pictures below refer to this bizarre notion.

Rexie also indicated that she needs to set the recored straight on Timothy Brown (the man that built Spirit House.) Evidently she has some insider, or special information about him. Personally I had thought Spirit House Society Board Member Jocelyn Godwin (retired Colgate University Professor that has written about 20 books) did an incredible job with his book on Spirit House, which he again referenced in Upstate Cauldron.


You and I are within our rights to photograph Spirit House, a nationally registered historic, from the street as long as we are not on her property.


When I heard all this I decided it was time to visit Spirit House and post some pictures on the Spirit House Society Blog. Not only to express my and SHS member's opinion on this matter, but to catalogue the continued deterioration of this grand and majestic historic home that sits on a very sacred site.


It is has been over five and a half years since Rexie purchased Spirit House. NOTHING HAS BEEN DONE TO PRESERVE, RESTORE OR EVEN MAINTAIN THE HOUSE; NOT EVEN A COAT OF PAINT TO COVER THE the many areas of BARE EXPOSED WORD. IT HAS CONTINUED TO DETERIORATE.


It is  important to catalogue the deterioration of this home for history. Before we distributed the money we had raised to Madison County not-for-profits ( Gerrit Smith Estate, Madison Hall in Morrisville) there was a discussion of whether we should pay for a professional photographer to photograph the home and send the pictures to NYS Archives; but we felt that we had enough pictures and could catalogue the decline as I am now doing.

The pictures below show the deterioration. I am surprised that Code Enforcement has not fined her for the condition of the home and the circus of junk on the property.

There is a chance you might see a Spirit House Picture at my talk on the 22nd in Oneida to Madison County Historical Society. In the mean time go visit and take some pictures and tell everybody about the tragedy that has befallen Spirit House. 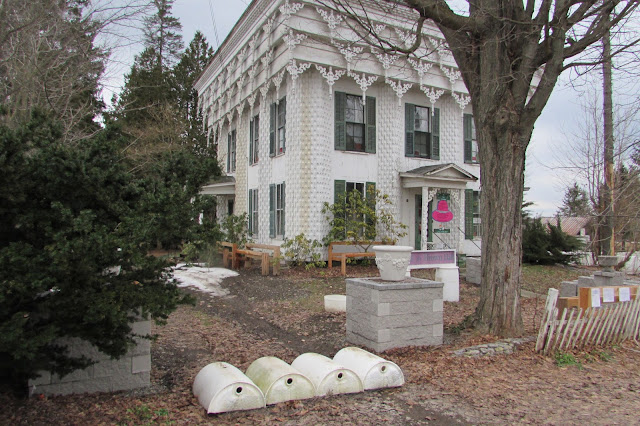 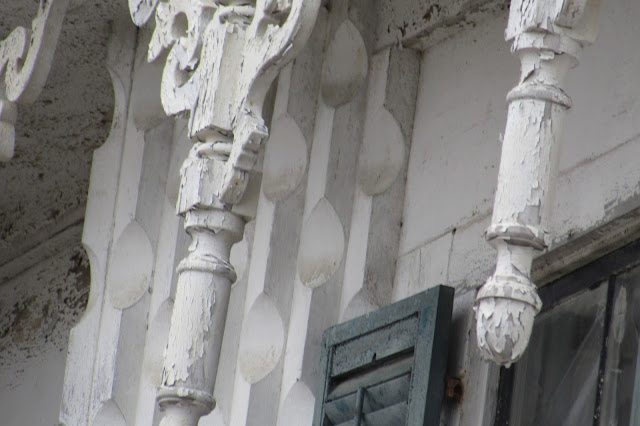 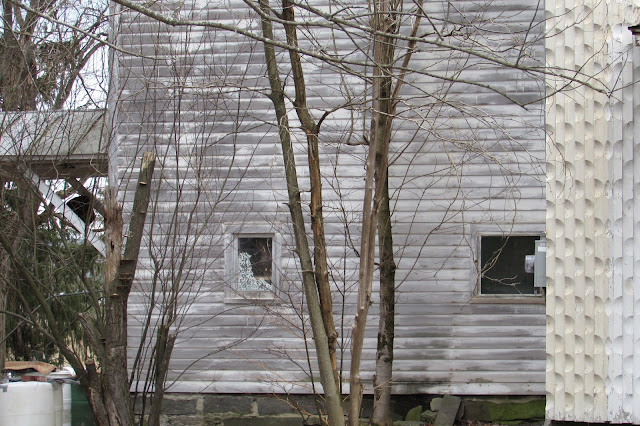 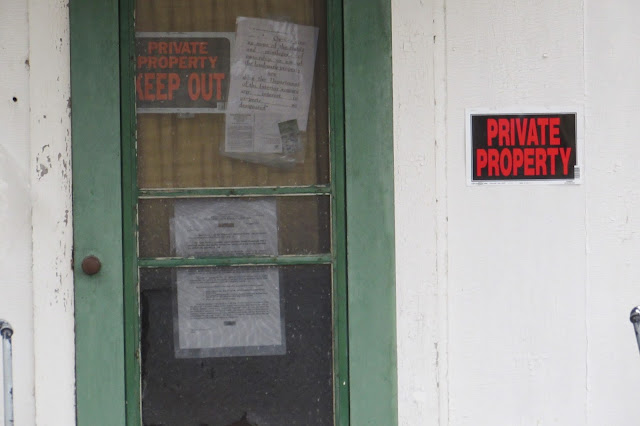 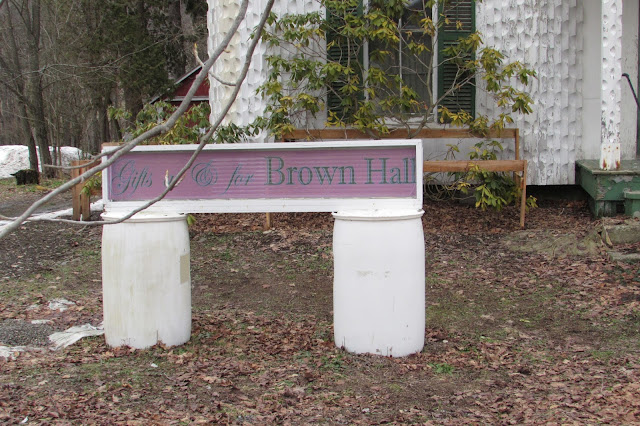 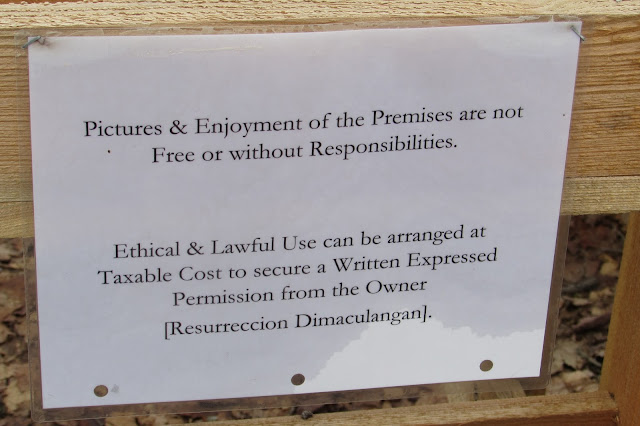 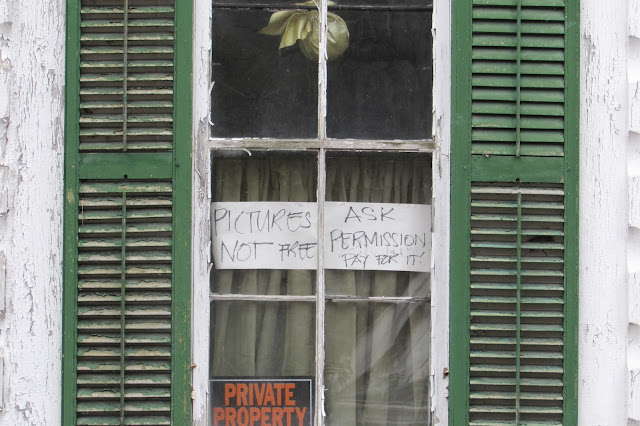 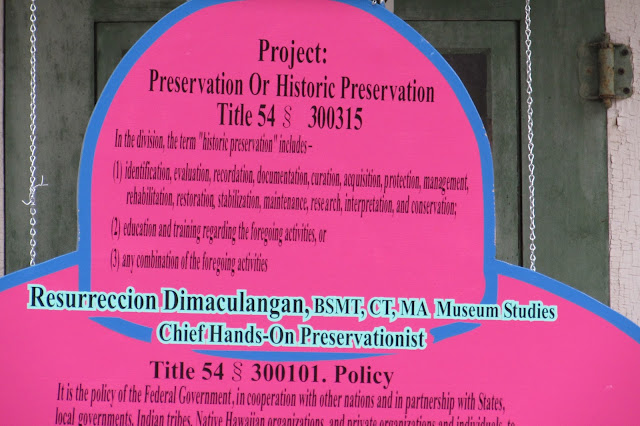 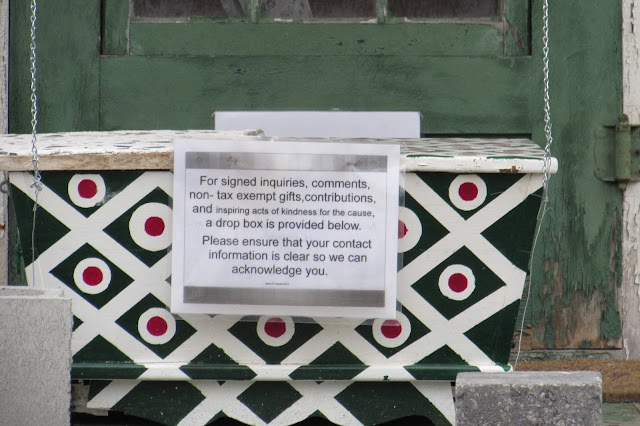 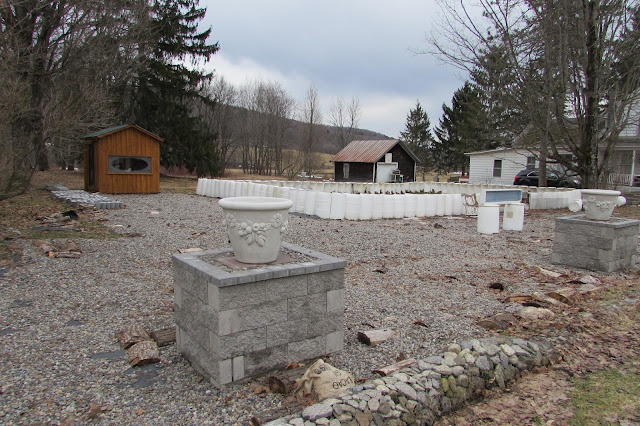 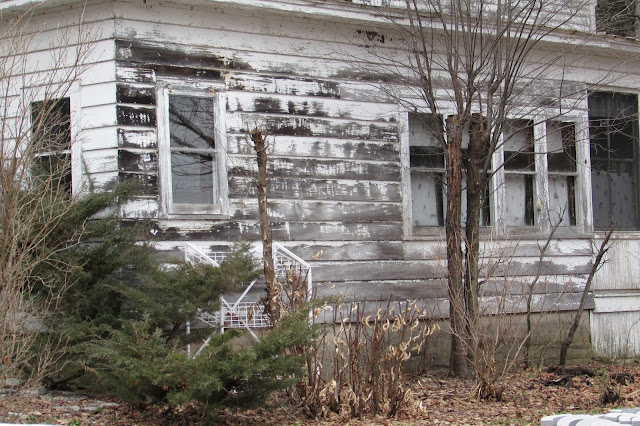 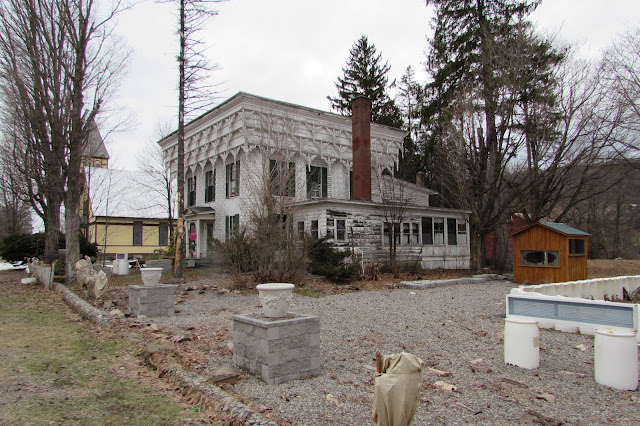 Thanks to Melanie Zimmer and Joscelyn Godwin for their work with the distribution of funds; one result of which was getting the signs repainted at Muller Hill. We did not donate any money, but tried to do so to the state to pay for the repainting. Instead they offered to have them repainted. 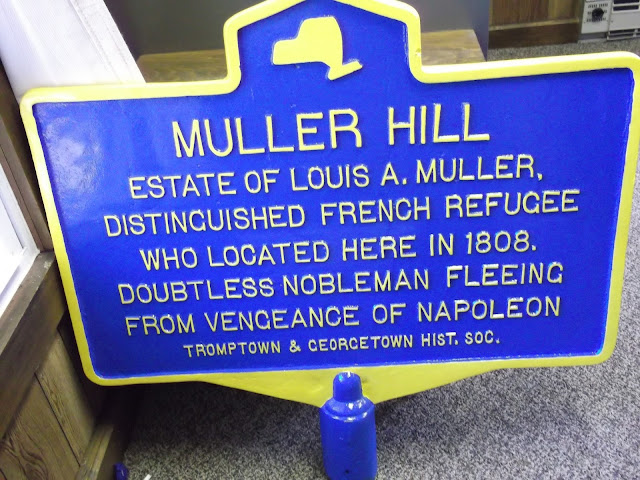 Posted by madis senner at 9:26 AM No comments:

Funds have been disbursed

The funds have been disbursed see below. A few of us made an effort to try to see if we could donate to an organization in Georgetown, Unfortunately, the Georgetown Historical Society is not a registered 501-c3 so we could not donate to them. We tried Muller Hill and the DEC and that did not work out; although signs at Muller Hill will now be painted and new ones put in, so we had some affect. We looked at....

Thanks for everyone's help and interest in our effort to buy Spirit House.

I will continue to post occasionally if I hear something; if nothing else keep a historical record of the house's deterioration.

I imagine the house will again come up for sale, but given Rexie's lack of upkeep and maintainance not much of it will be left.

Unfortunately Spirit House has not been properly maintained. The house is in desperate need of repair the grounds are going to ruin--the lawn has not been mown as of September. The following pictures were taken September 8, 2015. 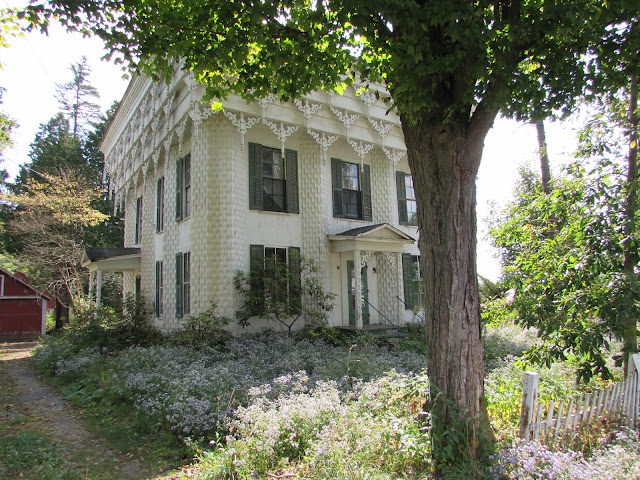 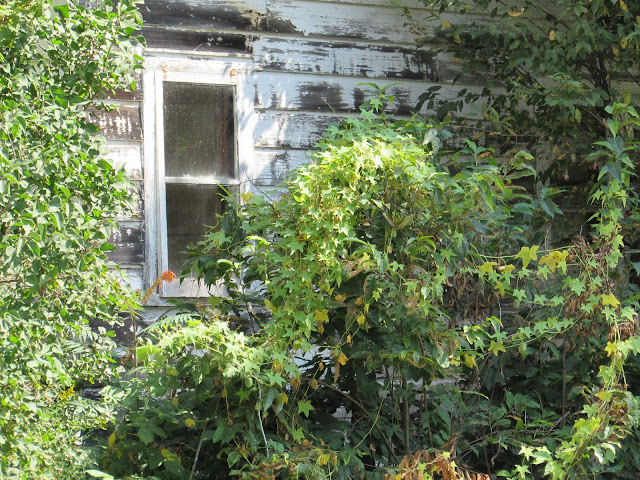 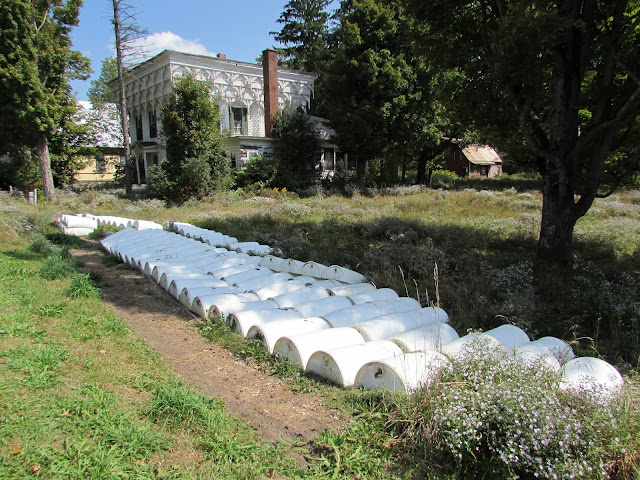 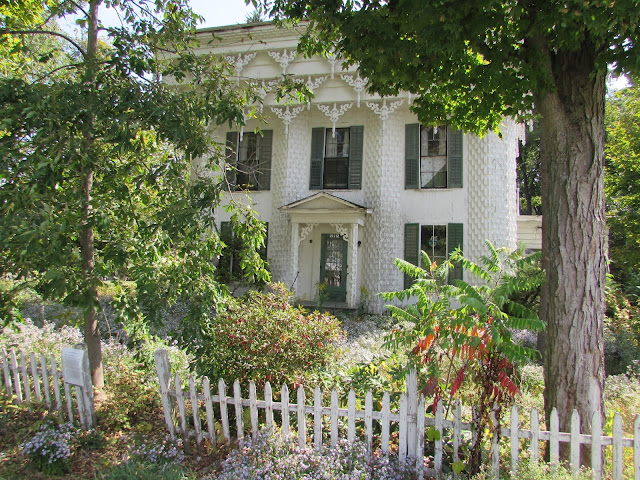 Posted by madis senner at 7:19 AM No comments:

Dear Spirit House Society Member,
I hope that all has been well with you.
This fall will mark four years since Spirit House was purchased by one of our members, Resurreccion Dimaculangan, for her own use. While our effort disbanded I did not distribute the $1,900 we had raised after expenses to other non-profits. I would like to do that now.
Sadly, it appears that Rexi has done nothing to preserve Spirit House. The paint has continued to peel and some parts of the house such as the sunroom, on the south side, are almost all bare wood. The lawn looks like it has not been mowed this year and is over a foot high. There are dozens of connected white half barrels on the front lawn that are collecting water and mildew. My understanding is that the barrels were supposed to be some sort of a fence. I will send you a separate email with some pictures; I am not attaching them to this email as I am concerned that they might be flagged as spam.
My inclination is to donate the money to non-profits in Madison County where Spirit house is located. Many in Madison County were helpful and encouraging to our effort. In particular I am thinking of the Abolitionist Hall of Fame in Peterboro and Madison Hall in Morrisville. Dot Willsey of the Abolitionist Hall of Fame tabled at our events and was very helpful and informative to my queries. Although our event at Madison Hall was not the success we hoped for, Mountain Bob treated us like royalty and were accommodated as to the charge.
I welcome input on where you would like the money to go. As I noted my inclination is to donate it to organizations that were helpful to our effort.
You have some time; so reflect on what you think should be done and email me. I would like to have resolved this by yearend.
I look forward to hearing from you. 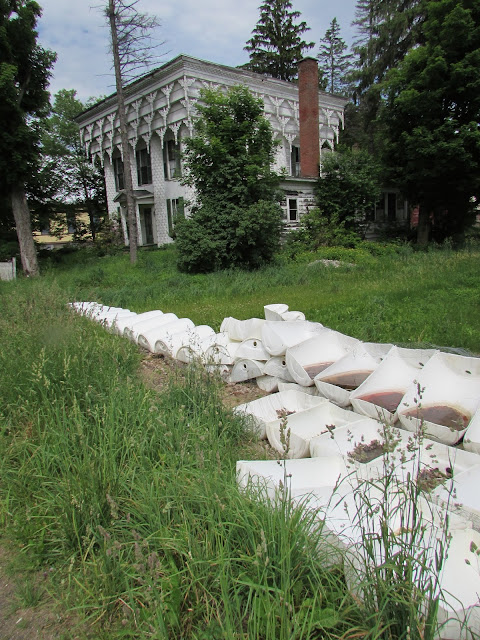 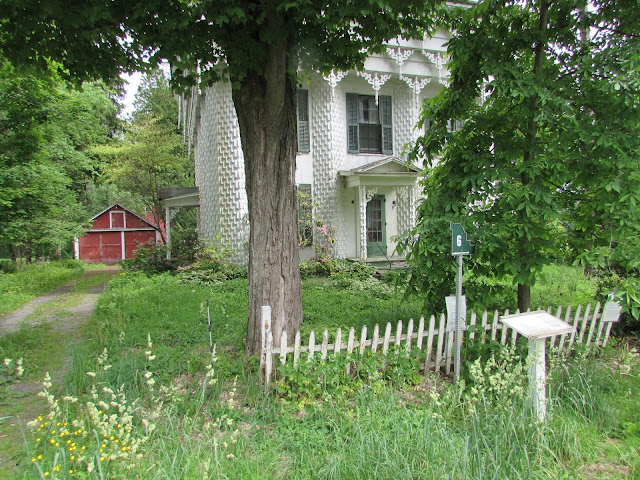 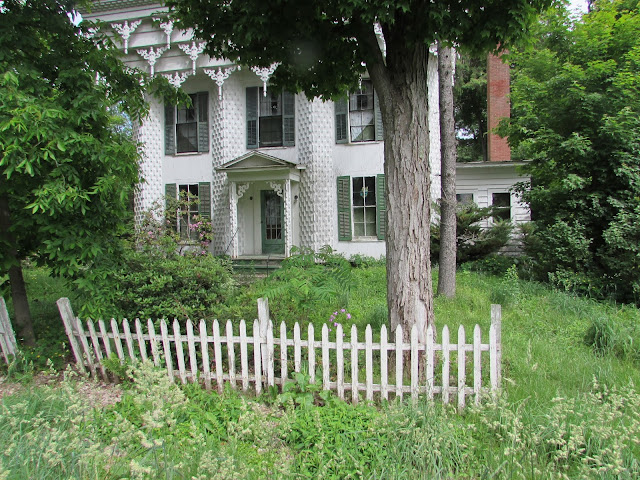 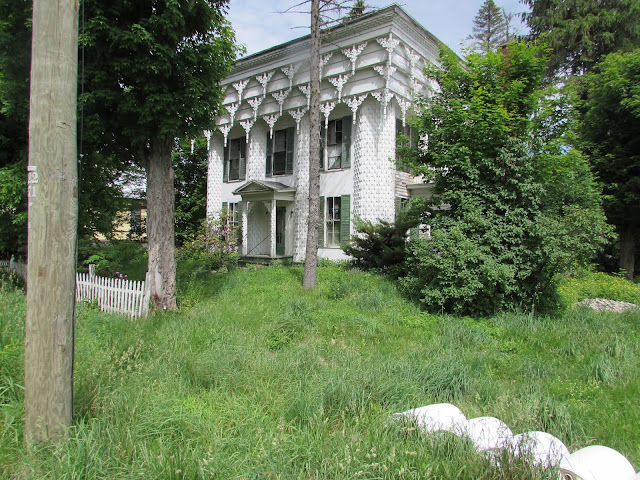 The following appears in this week’s Madison County Courier. Martha Conway has written a very informative article about the status of Spirit House and the financial condition and plans of the owner.

Spirit House Gets Exemption on Improvements
May 30, 2012 By margo Leave a Comment

There have been some developments since Rexie Friedman, aka Rexie Dimaculangan purchased Spirit House.

At a meeting with several steering committee members late last year she stated that she was interested in restoring and preserving the house but had no interest in honoring its Spiritualist roots. She implied that she was possibly interested in turning Spirit House into a museum or something similar. She gave no firm restoration plans or how the restoration would be financed.

She offered the following statement to convey to the SHS membership:
"The House is now in the hands of one individual that cares about conservation and preservation. She will honor the history and past and develop an economically sustainable structure within the town without being dragged by its spiritualist past."

We also learned that she has been living in Spirit House to save money. She was using a space heater and fireplace to keep warm.

One of our members was at a Georgetown Historical Society meeting in March were Rexie was trying to solicit interest to have her property taxes vacated. Rexie was described as being very dedicated and determined.

In late April two meetings where held in Georgetown where Rexie presented her case for why she should not have to pay property taxes for Spirit House. The town board eventually agreed to reduce taxes on any subsequent improvements to the house—a ten year hiatus on any improvements that would increase at a 10% rate per year. For example, if $100,000 in improvements were made the 1st year there would be no tax on the improvements, Year 2 taxes would be paid on $10,000, Year 2 pay taxes on $20,000 and year 10 she would have to pay taxes on the full $100,000.

No tax abatement was given on the house. She has to pay the full property taxes on $97,000.

At the meetings there were several queries about finances and restoration plans. Rexie said that there was $5,000 to $6,000 at hand for restoration work and that she was going to apply for a grant for the rest. I believe that I was told that she expected that the restoration costs for Spirit House to be about $5 million.

I will keep you posted on further developments.